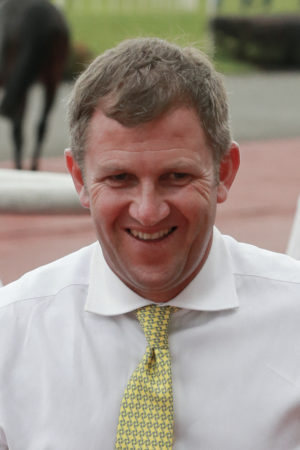 Record-breaking New Zealander Mark Walker is a five-time Premiership winning trainer and arrived in Singapore with outstanding credentials. The 2009/10 season saw him set a new record of 108 winners, bettering the 17 year-old mark of 104 previously held by Dave and Paul O’Sullivan. He also became the youngest trainer to win the Premiership when at 31 he took the prize in the 2003/04 season and in 2008/09 established a New Zealand record in prizemoney won – earning NZ$3.71 million. More than 800 winners have passed through his hands, of which more than 90 have been in “black type” races, including 20 at Group 1 level, among the most notable in New Zealand being three Kelt Capital Stakes including back-to-back victories in 2007 and 2008 with Princess Coup and in Australia the TJ Smith Handicap with Darci Brahma in 2005. Walker quickly made his mark in Singapore, landing his first feature race at his first full season in 2011 with FLYING FULTON in the Group 3 Committee’s Prize. Four more ‘black type’ wins have followed, amazingly all with the same FLYING FULTON, who was also voted Polytrack Champion in 2012. Walker finally won another feature with another horse in 2013 when two-year-old WAR AFFAIR took out the Group 2 Aushorse Golden Horseshoe. In the season ended December 2015, Walker was crowned Champion Trainer. DISTINCTIVE DARCI provided Walker with a well deserved Group win when winning the G2 Merlion Trophy in April 2018. Mark added more silverware to the cabinet when ELITE INVINCIBLE ran out a comfortable winner of the G2 Stewards’ Cup in June 2018. Walker celebrated his first Group 1 victory in Singapore when ELITE INVINCIBLE won the G1 Charity Bowl. Mark also trained the runner up KINGSMAN. It was ELITE INVINCIBLE who provided Mark with his second Group 1 victory in Singapore when winning the G1 Dester Singapore Gold Cup in fine style. Walker celebrated his second Trainers’ Premiership in 2019. 2021 proved to be yet another successful year for Mark as he celebrated his 4th win the Trainers’ Premiership.