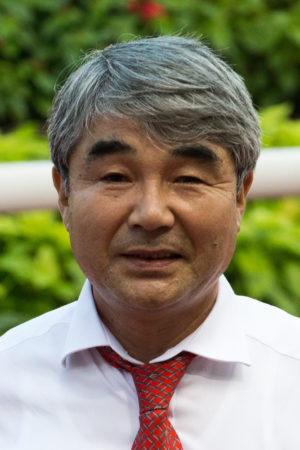 Hideyuki Takaoka left behind a 10-year-long training career in Japan’s National Association of Racing (NAR) when he moved to Kranji in December 2002. A jockey-turned-trainer, he received his professional trainer’s licence in 1992. In his Hokkaido training base, he bagged 337 winners including several in graded races. He saddled CROW RIVER in the 1996 Hokkai Yusyun and then sent out TOSHO LUCKY to win the 1998 Young Challenge Cup. In 1999, his charge, TAKINO SPECIAL captured the Hokkaido Yusyun for 2-year-olds and another charge, NAMI won the Edelweiss Yusyun in 2000. He topped the NAR Trainers Championship in 2000 with 54 winners. In that year, he was also voted the best trainer of the Hokkaido Racing NAR Grand Prix. In Singapore, Takaoka has trained his fair share of winners in Singapore but is best remembered for two main feats: winning the Singapore Gold Cup three times with the same horse – EL DORADO (2008, 2009 and 2011), and the Triple Crown in the 2009 Four-Year-Old Challenge with JOLIE’S SHINJU, culminating with the famed Singapore Derby. After EL DORADO retired in 2012, Takaoka continued his love story with the Gold Cup a few months later by adding a fourth win with BETTER LIFE, who also captured the Group 2 Queen Elizabeth II Cup and the Group 1 Emirates Singapore Derby in 2013, before being retired to start a new broodmare career in Australia. Takaoka, master of stayers, added another Group 1 success to his list of achievements when JUPITER GOLD won the G1 Emirates Singapore Derby in 2018. It was a delighted Hideyuki Takaoka who celebrated Group 1 success in the 2019 Gr 1 Raffles Cup with MAKANANI for long supporting patrons, Big Valley Stable.