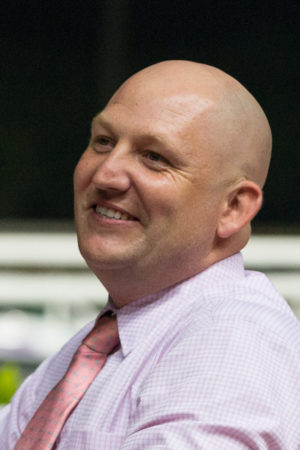 Daniel Meagher spent 11 years in Singapore when his Melbourne Cup-winning father John moved from Melbourne to Kranji in 1999. Meagher and elder brothers Chris and Paul assisted their father to many successes, including the Singapore Gold Cup with Kim Angel in 2000. Besides riding trackwork, Meagher was also travelling foreman for the yard when they sent horses to Dubai. After the Meagher family left Singapore in 2011 with a record of 577 winners including 29 at Group level (seven Group 1s), they continued training in Australia with the launch of a training partnership between Meagher Snr and sons Chris and Daniel, setting up stables at Eagle Farm in Brisbane. Married to former Singapore jockey Sabrina Kadir, Meagher has come full circle after he was granted a trainer’s licence in Singapore in April 2016. Daniel celebrated his first Group success since joining the training ranks in Singapore when SECRET WIN reigned supreme in the 2017 running of the G3 El Dorado Classic.