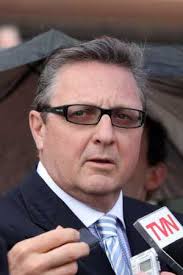 Lee Freedman comes to Singapore with a wealth of experience and success.  The crown jewel to his accolades has to be his five Melbourne Cups, including two of the three won by star mare MAKYBE DIVA. Freedman also won the race with TAWRRIFIC in 1989, SUBZERO in 1992 and DORIEMUS in 1995.

Lee made humble beginnings in Warwick Farm with his brother Anthony in 1983 and move to Flemington in 1984. Success was instant and they captured their first Group 1 winner with MISS CLIPPER in the SAJC Australasian Oaks in 1986. Lee has won 124 Group 1 races including the Group 1 Singapore Airlines International Cup with MUMMIFY in 2005.

Many champions have passed through his hands headed by SUPER IMPOSE, a winner of eight Group 1s, including the 1992 Cox Plate, two Epsom Handicaps and Doncaster Handicaps (twice).

Having retired in 2011, Lee took up various positions in the racing industry including Director of Racing for Lloyd Williams’ Macedon Lodge, a training partnership with Sydney-based Graeme Rogerson and an advisor to Sir Peter Vela’s Pencarrow Stud in New Zealand.  Lee eventually returned to training in partnership with Anthony in 2014.

It did not take long for Lee Freedman to record his first group success in Singapore when CIRCUIT LAND was victorious in the G2 Chairman’s Trophy in April 2018. Group 1 success was not long in coming when Lee saddled MR CLINT to win the G1 Singapore Guineas in May of the same year. The 2019 racing season saw a continuation of Lee’s success as he landed the G3 Fortune Bowl in February with Hong Kong-owned BLIZZARD. Group 1 success again beckoned for Lee Freedman in the Singapore Derby where SUN MARSHAL was an impressive victory. It was, in fact, a 1-2 for the stable, with MR CLINT running a gallant second. MR CLINT went one better when winning the G1 Dester Singapore Gold Cup in the same year. Lee Freedman further added to his list of honors when winning the G2 Merlion Trophy with EXCELLING. Lee Freedman won the final Group race of 2020 with SUPER DYNASTY winning the G3 Colonial Chief Stakes.