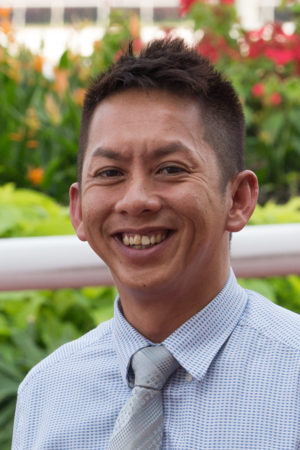 David Kok took his first steps in horse racing at his home town of Ipoh in 1993 when he was only 20, starting off as a syce with ex-trainer Boyle Chua. He then relocated to Singapore in 1996, spending two years with trainer Mick Kent before moving to Charles Leck’s yard in 1998. Following a short industrial attachment in Brisbane, Australia with various trainers, the Singapore permanent resident returned to Leck and became his stable supervisor in 2000. As Kok gained more experience, he soon earned his ‘B’ licence in 2005 before he finally got the nod for an ‘A’ licence in 2009. Though Kok does not saddle many runners in feature races, he was able to land his first Group success in the Group 1 Panasonic Kranji Mile in 2013 with CASH LUCK, who added a second silverware to his trophy cabinet with the Group 3 JBBA Moonbeam Vase the next year. David’s success has continued in 2016 to include two more Group 1 successes with his charge WELL DONE who won both the Patron’s Bowl and the Emirates Singapore Derby.