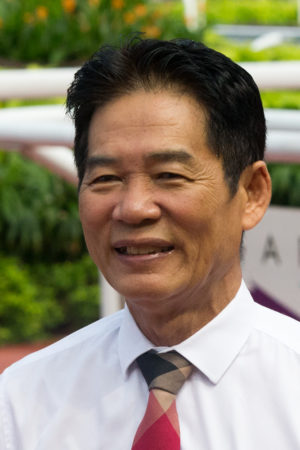 Singaporean trainer Leslie Khoo is a former top-flight jockey who rode away to major successes on the MRA circuit, including the Queen Elizabeth II Cup (twice) and the Selangor Tunku Gold Cup (four times). After he hung his boots, Khoo switched to training and was granted an MRA Professional Trainer licence in 2001, originally basing himself at Perak Turf Club in Malaysia. Among his achievements as a trainer are a second in the Trainers’ Premiership in 2003 with 33 winners and a fourth in 2006 with 33 winners. His major wins include the Juvenile Million Challenge in 2006 and the MRA Cup in 2007. Though he is yet to score a Group win in Singapore, he enjoyed his best season in 2011 when he finished runner-up to Patrick Shaw with a bumper haul of 66 winners.