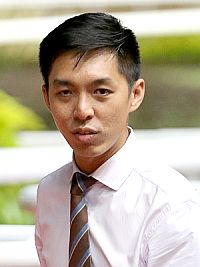 A racing fan since young, Singaporean Jason Lim (Lim Sin Yan Jason) , 37, decided to make horse racing his career in 2004 when he went to New South Wales, Australia to take up a trackriding course at the Australian Racing Institute. One year later, Lim returned to Singapore where he began as a syce with trainers Tim Pinfield and Susumu Nigishi, while also riding work.

He then graduated to the Stable Supervisor rank with trainer Alwin Tan and Mok Zhan Lun from 2010 to 2013 before becoming assistant-trainer while he was with Mok in 2014.

Lim has been assistant-trainer to trainer David Hill since last year, and with the British trainer bowing out, he will be taking over the bulk of his current string of horses. (Biography and photograph courtesy of Singapore Turf Club)