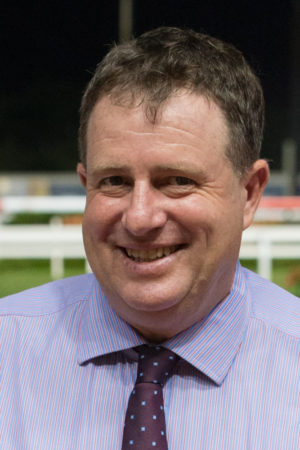 Stephen Gray, together with his father, Kevin was one of the leading training teams in New Zealand. They finished consistently amongst the top 10 in the New Zealand Trainers’ Premierships. Gray relocated to Singapore in 2000 and has quickly climbed through the grades to be among the most successful trainers at Kranji. His major successes include the 2001 Kranji Sprint with ST KENTIGERN, the 2003 Patrons’ Bowl with LIM’S REWARD and the 2007 Emirates Singapore Derby with LIM’S PRESTIGE. GIVEN VISION gave him a huge thrill in 2009 by capturing the last two legs of the Three-Year-Old Challenge. Another highlight of his career was EMPEROR MAX, the modest sprinter from Australia who won ran a brave second to Lucky Nine in the 2014 Group 1 KrisFlyer International Sprint before scoring a well-deserved win in the Group 2 Stewards’ Cup two weeks later. EMPEROR MAX repeated his performance in the 2015 Group 1 KrisFlyer International Sprint when running a gallant second to Hong Kong Champion, Aerovelocity. November 2016 saw Stephen adding two Group wins to his tally when LIM’S CRUISER landed the G2 E W Barker Trophy and the jewel in the crown, the G1 Dester Singapore Gold Cup with BAHANA. LIM’S CRUISER won the inagural running of the Rocket Man Sprint (previously Kranji Sprint) in March 2017 when making his first appearance since winning the G2 E W Barker Trophy in November 2016. LIM’S CRUISER provided Stephen with his first G1 for 2017 when posting a comprehensive victory in the G1 Lion City Cup.In 2018, Stephen again tasted Group 1 success when LIM’S CRUISER posted back to back victories in the G1 Lion City Cup. Stephen landed his second Singapore Derby when HARD TOO THINK was an impressive winner of the 2021 G1 Singapore Derby.HARD TOO THINK followed up on his G1 Derby win with an impressive victory in the G1 Queen Elizabeth Cup in October 2021.