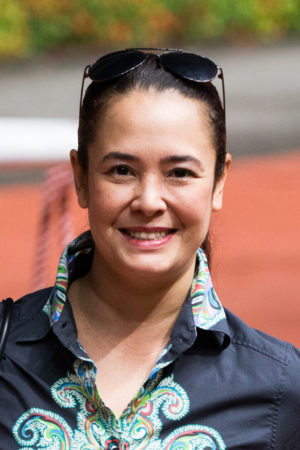 Leticia Dragon has always had the pedigree to become a horse-trainer. Her grandfather was a jockey as was her late father, trainer Douglas Dragon, and her late uncle Chris, an accomplished jockey who tragically died in his prime in a car accident. It was therefore no surprise that Leticia left her job as an air stewardess to become more involved with the stables in 2004. In 2007, she completed a 12-month thoroughbred trainer’s course at Traintech in the Gold Coast, Australia in six months, including a placement with trainer Gillian Heinrich. She became her father’s assistant-trainer in 2008 and took over when Dragon Snr retired at the age of 69 at the end of the 2011 season becoming the first woman to train at Kranji. Leticia remarkably captured her first feature race at her very first year of training (2012) with RISING EMPIRE landing the Group 3 Magic Millions Juvenile Championship.Leticia celebrated her second Group win when STAR EMPEROR won the G3 Jumbo Jet Trophy in July.