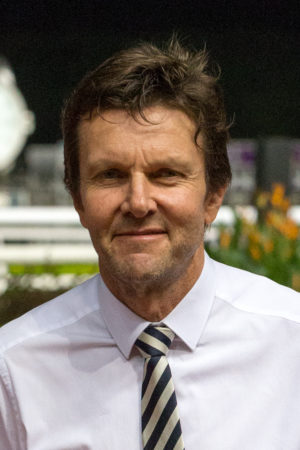 Michael Clements trained for five years in Zimbabwe, commencing in 1993. He was crowned Champion Trainer there in the 1995/96 and 1996/97 seasons and was runner-up during the 1994/95 and 1997/98 seasons. He trained over 260 winners in Zimbabwe and over 590 winners at Kranji including 60 feature race winners (Two Group 1, two Group 2, 17 Group 3’s, 17 Listed and 22 Stakes races), and a Triple Crown winner. He received his MRA licence in 1998 and has enjoyed his fair share of success since. He first saddled JAZZ MALONE to win the Singapore Derby Trial in 2000 and FAIRY TALE to win the Stewards’ Cup in 2004. He then saddled TOTALITY to win the 2013 Three Rings Trophy, DONTELLTHEWIFE to win the 2011 JBBA Moonbeam Vase, and REVOLTE to win the 2009 Singapore Guineas and the 2008 Stewards’ Cup. Smart filly KIWI KARMA gave him more accolades in the inaugural CECF Singapore Prestige Classic and the Dester Singapore Three-Year-Old Sprint in 2015. Michael repeated this in the 2017 Singapore Three Year Old Sprint when COUNTOFMONTECRISTO posted an emphatic victory. COUNTOFMONTECRISTO followed up with an impressive win in the G2 Singapore Three Year Old Classic. Clements’ rich vein of form continued when ALIBI won the G1 Patron’s Bowl, the second leg of the 4-year-old Challenge – his first Group 1 success. TOP KNIGHT gave Michael his first group win of the season when winning the G3 Singapore Three-year-old Classic in May. TOP KNIGHT again showed his class when winning the G1 Singapore Guineas in May 2019. COUNTOFMONTECRISTO bounced back to his best when winning the G2 Merlion Trophy in August 2019. Michael recorded his 600th win since moving to Kranji on Friday 15 November 2019. BOLD THRUSTER showed his class when winning the 2020 G3 Fortune Bowl. Michael enjoyed further Group success when COUNTOFMONTECRISTO won the 2020 G2 Chairman’s Trophy. BOLD THRUSTER added to his silverware when taking out the G3 Silver Bowl in February 2020. It was a triumphant Clements Stable who celebrated their victory in the G2 Stewards’ Cup with SIAM BLUE VANDA. Michael celebrated his first G1 Singapore Derby win with TOP KNIGHT in 2020.