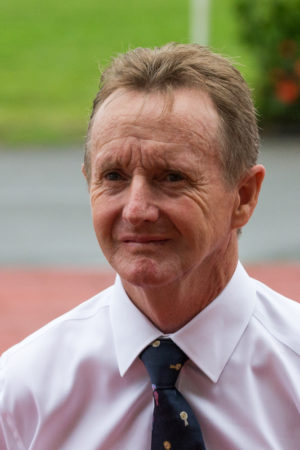 Steven Burridge has been in the racing industry since 1970 when he started out as an apprentice jockey licensed by the Victoria Racing Club. He received his professional jockey licence in 1975. He rode on the MRA circuit with a visiting jockey permit in 1987 before riding in Macau from 1989 to 1994. He returned to the MRA circuit in 1994 to work as a track rider for several trainers. From 1999, he was Stable Supervisor to several trainers in Malaysia and Singapore before becoming a trainer in his own right in 2005. Burridge was quick off the mark, earning the distinct honour of being presented the Queen Elizabeth II Cup by Her Majesty herself in 2006 after KING AND KING won the Group 2 event, which he went on to win on two more occasions in 2008 (TRIGGER EXPRESS) and 2014 (WILD GEESE). Burridge was crowned Singapore champion trainer in 2010, the same year he also captured the time-honoured Singapore Gold Cup with RISKY BUSINESS. His next big win at Kranji was the Group 1 Patron’s Bowl with SPEED BABY. Burridge often crosses the Causeway to plunder cross-border events at his old hunting ground, and has achieved a high strike rate, netting to date two Penang Gold Cups and three Piala Emas Sultan Selangors in five years. Burridge’s success with two year olds was again displayed when LIM’S LIGHTNING won the G2 Aushorse Golden Horseshoe in July 2018. Group success returned to Steven Burridge with his charge, MR MALEK, winning the 2021 G2 Stewards’ Cup.