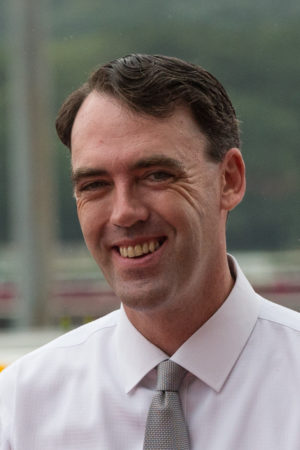 Shane Baertschiger took over from his father Don who retired in 2012 after training in Singapore for 19 years. Shane began his career as stable supervisor to his father at Bukit Timah in 1996 before being granted his Assistant-trainer’s licence in 1999, just before the move to Kranji. Shane held that position for twelve years, during which time he played a key part in many of his yard’s big race successes such as the Group 1 Lion City Cup in 2008 with CAPABLANCA among others. The young trainer did not take long to step out of his father’s shadow, knocking in winners on a regular basis, and even secured his first feature race at his second year (2013) when EL MILAGRO won the Group 3 Kranji Sprint. Shane secured the first G2 of his training career in July 2017 when BE BEE won the G2 Golden Horseshoe for Auric Stable. Shane added another string to his bow when FAALTLESS won the G3 Garden City Trophy for the second time, the first being in 2014. It was a memorable 2018 Easter Weekend when Shane landed both feature races, the G3 Singapore Three Year Old Sprint with BE BEE and the G3 JBBA Rocket Man Sprint with ARAMCO. Shane’s rich vein of form continued when winning the G3 Jumbo Jet Trophy with PREDITOR. ARAMCO wrapped up another group success for Shane when winning the G3 Garden City Trophy, making it back to back wins in this race for him. Shane has another star on his hands in the form of BOLD THRUSTER who won the 2018 G3 Saas Fee Stakes.